The Common Public Radio Interface (CPRI) standard defines the interface of base stations between the Radio Equipment Controllers (REC) in the standard, to local or remote radio units, known as Radio Equipment (RE). 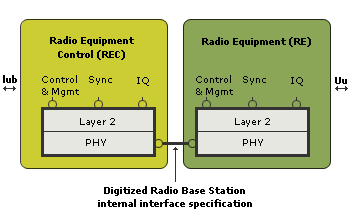 Traditionally, CPRI links are over Fibre Optic cables, which can be either:

CPRI bit rates are defined by the at www.cpri.info

CPRI transports I/Q data of particular antennas and particular carriers. This “unit” is called an AxC unit or Antenna-Carrier unit. As an example:
In an LTE system, if I=16 bits and Q=16 bits then one AxC is of length 32 bits.

The CPRI standard is planned to evolve to eCPRI which runs over IP/Ethernet. The new specification will enhance the support for the 5G Front-haul by providing functionality to support CPRI (7.0) over Ethernet allowing for CPRI and eCPRI interworking.

CableFree has pioneered the use of transparent uncompressed CPRI transport directly over wireless links at Nx 1.22Gbps to provide “Front Haul” from the remote antenna location to centralised base station infrastructure with distances up to 10 to 20km.

By using transparent connections, there is no latency or compression of the transmitted signal, which is identical in quality to traditional Fibre Optic connections, but with huge advantages in flexibility and speed of roll-out and deployment.  Also, the CableFree CPRI units are significantly lower in latency than fibre due to two factors:

CableFree have coined the term “Wireless to the Antenna” (WTTA) as a complement to the existing term “Fibre to the Antenna” (FTTA). FTTA architecture has enabled lower power requirements, distributed antenna sites, and a reduced base station footprint than conventional tower sites.

WTTA using transparent CPRI links operating at 1.22Gbps or 2.5Gbps means that the Remote Radio Heads can be located up to 10 or 20km away from the Base Station infrastructure, without requiring fibre optic cables, which can be expensive and difficult to lay.  Usually, existing fibre runs are along city blocks at street level and do not go directly to the exact rooftop sites where the base stations are located.  Conversely, Wireless “Front Haul” MMW or FSO units can be directly co-located along with the Base Station and Antenna infrastructure, and immediately deployed in minutes or just a few hours for permanent installations.

The CPRI standard allows for different bit rates.  These are easy to achieve over fibre optics with today’s technology.  However over wireless links, the capacity is more limited due to available spectrum, link margins, atmospherics and technology limits.  The following are defined for CPRI:

Note that generally bit rate options 1,2,3 are available over MMW, and 1,2 over FSO.  These can be “aggregated” using 2+0 and higher (4+0, etc) links to provide higher capacities, for example where more LTE sectors are required.
Continuing Advances in MMW and FSO transmission will enable transport of higher CPRI line rates up to 10Gbps for example.