A Remote Radio Head (RRH) is a remote radio transceiver that connects to radio base station unit via electrical or wireless interface. The RRH is termed “Remote” as it is usually installed on a mast-top, or tower-top location that is physically some distance away from the base station hardware which is often mounted in an indoor rack-mounted location

What is a Remote Radio Head (RRH) ?

Remote radio heads (RRHs) have become one of the most important subsystems of today’s new distributed base stations. The remote radio head contains the base station’s RF circuitry plus analog-to-digital/digital-to-analog converters and up/down converters. RRHs also have operation and management processing capabilities and a standardized optical interface to connect to the rest of the base station. Modern interfaces standards for RRH interconnect are CPRI and OBSAI which enable interoperability between hardware items and faster time-to-market for complete solutions.   This will be increasingly true as LTE networks are deployed. Remote radio heads make MIMO operation easier; they increase a base station’s efficiency and facilitate easier physical location for gap coverage problems. RRHs will use the latest RF component technology including GaN RF power devices and envelope tracking technology within the RRH RFPA.

Fourth-generation (4G) and beyond infrastructure deployments will include the implementation of Fiber to the Antenna (FTTA) architecture. FTTA architecture has enabled lower power requirements, distributed antenna sites, and a reduced base station footprint than conventional tower sites. The use of FTTA will promote the separation of power and signal components from the base station and their relocation to the top of the tower mast in a Remote Radio Head (RRH).

Wireless to the Antenna (WTTA)

Using Wireless (Microwave, Millimeter Wave, MMW, Free Space Optics, FSO) links instead of fibre allows the Remote Radio Head (RRH) to be connected without need for fibre optics.  By avoiding the needs for digging, trenches, leased circuits from telcos, dark fibre or way-leaves for disrupting busy city streets, 4G/LTE networks can be realised very quickly with installation taking hours rather than days, weeks or months.  WTTA is being pioneered by vendors such as Wireless Excellence with the CableFree MMW and FSO product lines.

The remote radio head (RRH) contains the base station’s RF circuitry plus analog-to-digital or digital-to-analog converters and up/down converters. 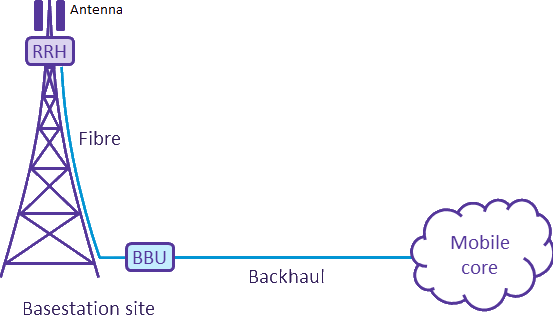 It is sitting on top of cell tower that mainly performs following functions:

RRH has been made of RF transmitter chain and RF receiver chain which includes the ADC (Analog to digital converter), DAC (Digital to analog converter), Mixer, PA (Power amplifier), LNA (Low Noise Amplifier) etc. Basic Block diagram of RRH is as shown below:

The RRH is connected to the Base band unit (BBU) via fibre optical cable which uses CPRI format signals. Optical cable is used because it has less loss and it is cheaper as compared to RF Coaxial cable, especially at the CPRI bit rates which can be 6Gbps up to 10Gbps or more.   One base-band unit is connected to multiple RRHs depending upon the capability of base-band unit.  The following example shows 3 RRH’s connected to one baseband unit to provide 3 sectors of coverage: 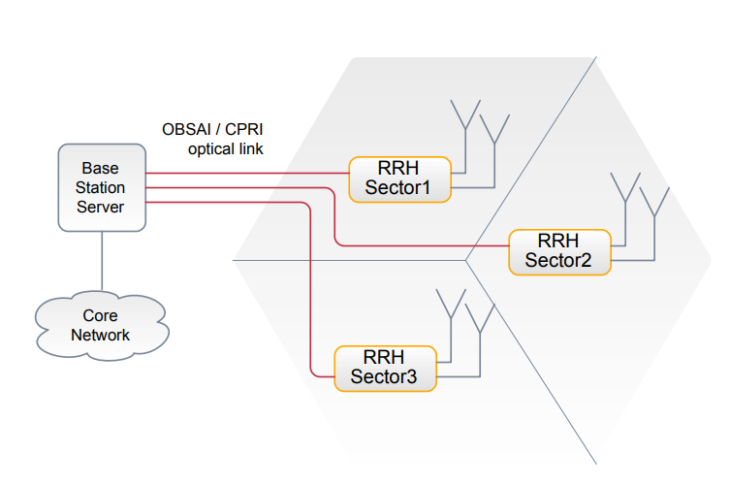