CableFree IoT – The Internet of Things 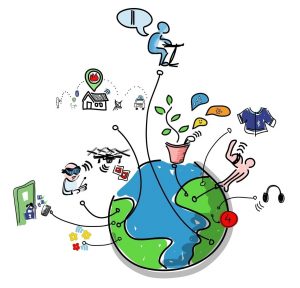 The IoT (Internet of Things) is the network of physical devices, vehicles, home appliances and other items embedded with electronics, software, sensors, actuators, and network connectivity which enables these objects to connect and exchange data. Each thing is uniquely identifiable through its embedded computing system but is able to inter-operate within the existing Internet infrastructure.

The CableFree product range is ideal to implement and connect an Internet of Things network using  either 4G/LTE or WiFi solutions to connect IoT devices:

LTE Internet of Things is a suite of two complementary narrowband technologies – eMTC1 & NB-IoT2 – defined starting in 3GPP Release 13. Together, they deliver optimized performance and efficiency for a wide range of low-power, wide-area Internet of Things

NB-IoT is a narrowband radio technology designed for the Internet of Things and is one of a range of Mobile (MIoT) technologies standardized by the 3rd Generation Partnership Project (3GPP).  This standard focuses specifically on indoor coverage, low cost, long battery life, and enabling a large number of connected devices. The NB-IoT technology is deployed “in-band” in spectrum allocated to Long Term Evolution (LTE), using resource blocks within a normal LTE carrier (or in the unused resource blocks within a LTE carrier’s guard-band) or “standalone” for deployments in dedicated spectrum. It is also suitable for the re-farming of GSM spectrum.

The advantage of LTE-M over NB-IoT is its comparatively higher data rate, mobility, and voice over the network, but it requires more bandwidth, is more costly, and cannot be put into guard band frequency band for now.. In March 2019, the Global Mobile Suppliers Association reported that over 100 operators had deployed/launched either NB-IoT or LTE-M networks.

NB-IoT Forum members, so far, indicates a variety of bands have been used. Below is an overview of the frequency bands supported in the different regions:

Please contact us with any questions on CableFree Wireless Technology