Why Fog is critical for Free Space Optics links

Atmospheric effects such as fog, snow, rain, smog, sand-storms and scintillation (thermal shimmer) all cause attenuation of the infrared signal as it passes through the atmosphere. With the exception of scintillation, the attenuation is caused by particles, or droplets either absorbing the radiation, or reflecting it away from the transmission path.

Effect on Short and Long links

For short links (under 200-500m in most countries), there is no real effect of atmospheric effects on a practical Free Space Optics link.  The attenuation is less than the available Fade Margin of the FSO link.  Some vendors use Automatic Transmit Power Control (ATPC) to compensate for the increased attenuation by increasing the transmit power during “fade” events.

For longer links (500m up to 4km or more), dense / thick fog may cause serious link attenuation, greater than the available fade margin.   These FSO links therefore may suffer brief or longer outages during high fade events.

Resilient Technologies using diverse routes such as Radio, Microwave or Millimeter Wave (MMW) can be used to ensure the total communication link remains uninterrupted during these conditions.  CableFree has pioneered “UNITY” platforms to ensure highest uptime, distance and availability by combining FSO with either radio or MMW.

With water droplets, the worst attenuation is where droplet size is similar to the wavelength of the infrared radiation – which happens to be that of fog. In very thick fogs, extremely high attenuation is experienced, exceeding 100dB/km. To put that in perspective, a practical FSO system may have a fade margin of 20 – 30 dB when deployed; which would imply deployment at under 500m in these conditions.

Following picture is a street in Oxford, UK, on a typical winter morning.  Light fog/mist over a country road.

Fortunately, extremely thick fog is quite rare, and some FSO vendors have advanced planning tools which use weather databases (over 2,700 measurement points worldwide) to predict the reliable distances for almost any city in the world. For deployment above these distances, microwave backup is used to ensure uninterrupted data transport.

Radiation fog is formed by the cooling of land after sunset by thermal radiation in calm conditions with clear sky. The warm ground produces condensation in the nearby air by heat conduction. In perfect calm the fog layer can be less than a meter deep but turbulence can promote a thicker layer. Radiation fogs occur at night, and usually do not last long after sunrise, but they can persist all day in the winter months especially in areas bounded by high ground. Radiation fog is most common in autumn and early winter. Examples of this phenomenon include the Tule fog.

Ground fog is fog that obscures less than 60% of the sky and does not extend to the base of any overhead clouds.However, the term is usually a synonym for radiation fog which is very shallow; in some cases the depth of the fog is on the order of tens of centimeters over certain kinds of terrain with the absence of wind. 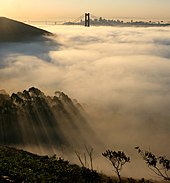 Advection fog occurs when moist air passes over a cool surface by advection (wind) and is cooled. It is common as a warm front passes over an area with significant snow-pack. It is most common at sea when moist air encounters cooler waters, including areas of cold water upwelling, such as along the California coast .

The advection of fog along the California coastline is propelled onto land by one of several processes. A cold front can push the marine layer coast-ward, an occurrence most typical in the spring or late fall. During the summer months, a low pressure trough produced by intense heating inland creates a strong pressure gradient, drawing in the dense marine layer. Also during the summer, strong high pressure aloft over the desert southwest, usually in connection with the summer monsoon, produces a south to southeasterly flow which can drive the offshore marine layer up the coastline; a phenomenon known as a “southerly surge”, typically following a coastal heat spell. However, if the monsoonal flow is sufficiently turbulent, it might instead break up the marine layer and any fog it may contain. Moderate turbulence will typically transform a fog bank, lifting it and breaking it up into shallow convective clouds called stratocumulus.

Evaporation fog or steam fog forms over bodies of water overlain by much colder air; this situation can also lead to steam devils forming. Lake effect fog is of this type, sometimes in combination with other causes like radiation fog. It tends to differ from most advective fog formed over land in that it is, like lake-effect snow, a convective phenomenon, resulting in fog which can be quite a bit denser, deeper, and looks fluffy from above. Most other fog is stratiform; steam devils, which look like their dust counterparts, are often seen in this situation.

Ice fog forming in very low temperatures can be the result of other mechanisms mentioned here, as well as the exhalation of moist warm air by herds of animals. It can be associated with the diamond dust form of precipitation, in which very small crystals of ice form and slowly fall. This often occurs during blue sky conditions which can cause many types of halos and other results of refraction of sunlight by the airborne crystals.

Freezing fog, which deposits rime, is composed of droplets of supercooled water which freezes to surfaces on contact.

Precipitation fog (or frontal fog) forms as precipitation falls into drier air below the cloud, the liquid droplets evaporate into water vapor. The water vapor cools and at the dewpoint it condenses and fog forms.

Hail fog sometimes occurs in the vicinity of significant hail accumulations due to decreased temperature and increased moisture leading to saturation in a very shallow layer near the surface. It most often occurs when there is a warm, humid layer atop the hail and when wind is light. This ground fog tends to be localized but can be extremely dense and abrupt. It may form shortly after the hail falls; when the hail has had time to cool the air and as it absorbs heat when melting and evaporating.

Upslope fog forms when moist air is going up the slope of a mountain or hill which condenses into fog on account of adiabatic cooling, and to a lesser extent the drop in pressure with altitude.

Heavy rain, found in the tropics, such as Malaysia, also attenuates the infrared. However, practical measurements have demonstrated that at moderate distances (1km) FSO transmission is still uninterrupted.

FSO Units have excellent performance in areas of high rainfallIn such regions, microwave systems operating above 18GHz are so badly affected that the bands are virtually unusable. So the relative immunity of FSO to ‘rain-fade’ makes Free Space Optics an attractive option in high-rainfall regions.