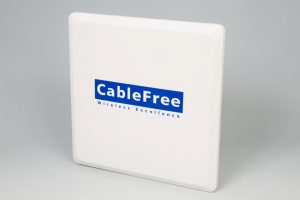 This technology paper contains explanations of key terms related to Antenna technology. Selection of the right antenna is key to ensure successful design and implementation of a Wireless Network.  Our goal is to ensure you can understand and choose the correct CableFree antenna for your application – if in doubt, please Contact Us and our team of experts will guide you to ensure you have the correct antennas.

Antenna gain is usually defined as the ratio of the power produced by the antenna from a far-field source on the antenna’s beam axis to the power produced by a hypothetical lossless isotropic antenna, which is equally sensitive to signals from all directions. Usually this ratio is expressed in decibels, and these units are referred to as “decibels-isotropic” (dBi). An alternative definition compares the antenna to the power received by a lossless half-wave dipole antenna, in which case the units are written as dBd. Since a lossless dipole antenna has a gain of 2.15 dBi, the relation between these units is: gain in dBd = gain in dBi − 2.15 d. For a given frequency, the antenna’s effective area is proportional to the power gain. An antenna’s effective length is proportional to the square root of the antenna’s gain for a particular frequency andradiation resistance. Due to reciprocity, the gain of any antenna when receiving is equal to its gain when transmitting.

Directive gain or directivity is a different measure which does not take an antenna’s electrical efficiency into account. This term is sometimes more relevant in the case of a receiving antenna where one is concerned mainly with the ability of an antenna to receive signals from one direction while rejecting interfering signals coming from a different direction.

The effective area or effective aperture of a receiving antenna expresses the portion of the power of a passing electromagnetic wave which it delivers to its terminals, expressed in terms of an equivalent area. For instance, if a radio wave passing a given location has a flux of 1 pW / m2 (10−12 watts per square meter) and an antenna has an effective area of 12 m2, then the antenna would deliver 12 pW of RF power to the receiver (30 microvolts rms at 75 ohms). Since the receiving antenna is not equally sensitive to signals received from all directions, the effective area is a function of the direction to the source.

Due to reciprocity (discussed above) the gain of an antenna used for transmitting must be proportional to its effective area when used for receiving. Consider an antenna with no loss, that is, one whose electrical efficiency is 100%. It can be shown that its effective area averaged over all directions must be equal to λ2/4π, the wavelength squared divided by 4π. Gain is defined such that the average gain over all directions for an antenna with 100% electrical efficiency is equal to 1. Therefore, the effective area Aeff in terms of the gain G in a given direction is given by:

For an antenna with an efficiency of less than 100%, both the effective area and gain are reduced by that same amount. Therefore, the above relationship between gain and effective area still holds. These are thus two different ways of expressing the same quantity. Aeff is especially convenient when computing the power that would be received by an antenna of a specified gain, as illustrated by the above example 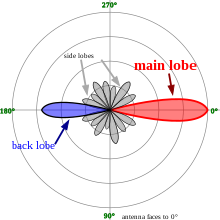 Polar plots of the horizontal cross sections of a (virtual) Yagi-Uda-antenna. Outline connects points with 3db field power compared to an ISO emitter.

The radiation pattern of an antenna is a plot of the relative field strength of the radio waves emitted by the antenna at different angles. It is typically represented by a three-dimensional graph, or polar plots of the horizontal and vertical cross sections. The pattern of an ideal isotropic antenna, which radiates equally in all directions, would look like a sphere. Many nondirectional antennas, such as monopoles and dipoles, emit equal power in all horizontal directions, with the power dropping off at higher and lower angles; this is called an omnidirectional pattern and when plotted looks like a torus or donut.

Near Field and Far Field regions

The space surrounding an antenna can be divided into three concentric regions: the reactive near-field, the radiating near-field (Fresnel region) and the far-field (Fraunhofer) regions. These regions are useful to identify the field structure in each, although there are no precise boundaries.

In the far-field region, we are far enough from the antenna to neglect its size and shape. We can assume that the electromagnetic wave is purely a radiating plane wave (electric and magnetic fields are in phase and perpendicular to each other and to the direction of propagation). This simplifies the mathematical analysis of the radiated field.

As an electromagnetic wave travels through the different parts of the antenna system (radio, feed line, antenna, free space) it may encounter differences in impedance (E/H, V/I, etc.). At each interface, depending on the impedance match, some fraction of the wave’s energy will reflect back to the source,[18] forming a standing wave in the feed line. The ratio of maximum power to minimum power in the wave can be measured and is called the standing wave ratio (SWR). A SWR of 1:1 is ideal. A SWR of 1.5:1 is considered to be marginally acceptable in low power applications where power loss is more critical, although an SWR as high as 6:1 may still be usable with the right equipment. Minimizing impedance differences at each interface (impedance matching) will reduce SWR and maximize power transfer through each part of the antenna system.

For further information on the range of CableFree Radio Antennas and Wireless networking products:
Please Contact Us